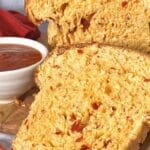 Pizza Bread Loaf is pepperoni, dried tomatoes and parmesan in a craveable taste explosion. It’s a meal on its own or dip in tomato soup and serve with a crisp salad.

This is the perfect appetizer for your next Italian meal. It’s a savory bread with all the things you love about pizza. Toast it with garlic butter for garlic toast.

Imagine a toasted salami sandwich on a bread that already has the delicious flavors of pizza. Or, grilled cheese! The possibilities are only limited by your imagination.

Harvest too many cherry tomatoes?

I don’t know what it is about cherry tomatoes in the garden. It seems like they never stop producing. This recipe was developed because of large harvests.

There are only so many cherry tomatoes we can eat. They’re delicious. But, they’re still growing!

Making Your Own Dried Tomatoes

I dried about one pound cherry tomatoes for this recipe. It made a little over ½ cup of dried tomatoes. If you don’t have your own cherry tomatoes, you can buy them from the store and do the same thing.

Wash all your tomatoes and allow to air dry. For best results, cut the cherry tomatoes in half.

Toss the pieces with two or three tablespoons of olive oil and 1 or 2 teaspoons Bragg Organic Sprinkle.

Have you tried making your own spice blends? Meggan of Culinary Hill has a recipe for Italian seasoning here, if you would like to give it a try.

If you don’t have a bread machine, have a look at this Cuisinart Bread Machine (aff link) that we use. We’ve had it since 2013 and it still works great.

For more information, check out our Cuisinart Bread Maker Recipes.

It will take about 6-12 hours to dehydrate fully, depending on your humidity. Check them every 2 to 4 hours and turn them, as necessary.

Because the cherry tomatoes are small, once they’re dehydrated, they end up being about the size of a couple of raisins. I like to use the mesh screen on the trays so that they don’t fall through.

Once the tomatoes are dehydrated, place them in an airtight container in the refrigerator until ready to use. If you don’t plan on using them in 5-7 days, you will want to store the dehydrated tomatoes in the freezer.

Look in the salad section of your grocery store for dried tomatoes as well. I’ve seen packages of them in the same section as salad croutons.

You might notice that this pizza bread loaf has a unique color. That’s not photoshop. It’s the actual color of the bread.

Before you add the ingredients to the bread machine, it’s necessary to prep the tomatoes in olive oil. This darkens the oil which gives the bread this darker yellow coloring.

You would achieve the same result from sun dried tomatoes. Try to strain out the amount of tomatoes needed then use the required amount of oil, directly from the jar.

If you have any extra oil reserved from the sun dried tomatoes, try using it in this Olive Salad Sandwich Spread.

I like to use the bread machine (aka bread maker) about once or twice a week. You can check out all my bread machine recipes here. Or, maybe try one of my favorites. 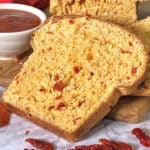 Prevent your screen from going dark
Tap to leave a star rating
5 from 26 votes
Prep Time: 20 minutes
Cook Time: 25 minutes
Rising Time: 2 hours
Total Time: 2 hours 45 minutes
Servings: 12 slices
Calories: 230kcal
Author: Christian Guzman
Save or Print
Pizza Bread Loaf is pepperoni, dried tomatoes and parmesan in a craveable taste explosion. It's a meal on its own or dip in tomato soup and serve with a crisp salad.