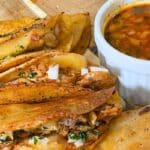 These easy chicken birria tacos, also called quesabirria tacos, will become your new favorite and taco Tuesday will never be the same.

Although the more traditional birria is made with goat or lamb, or more recently, beef, I’ve decided to change the rules a bit. I’m using less expensive chicken, which also has the benefit of taking less time to cook.

If you’re wondering, yes, these are those delicious looking crispy tacos that you’ve been seeing all over the internet. You can’t even search tacos without seeing a plate of tacos served with a little bowl of consomme for dipping.

Maybe we could describe it as the French dip of Mexico! Work with me here.

Is There Such a Thing as Chicken Birria Tacos?

The word birria means “braised meat”. The most typical meat used is goat and many die-hard connoisseurs will insist that you can’t have birria if it’s not made with goat.

This is simply not the case. Since it means braised, it can be any meat at all from venison to beef to, yes, even chicken.

If you are visiting Mexico, you will find birria served in a bowl like a stew or in tacos like the ones here. If looking for chicken, you would ask for “birria de pollo”. It’s not quite as popular as beef, but is popular in many kitchens because chicken is less expensive and doesn’t require a long cook time.

How Do You Make Birria Tacos Crunchy?

After working with it several times, I’ve found that the temperature of the fying oil must be high enough that it fries the tortillas instead of soaking into them.

If you are getting soft tortillas, try turning up the heat to fry them more quickly. Be careful to protect yourself from the hot oil, but you will definitely need to use the higher temperatures so the grease doesn’t have a chance to soak into the tortilla.

Do I Have to Use An Instant Pot?

Because the red chile sauce is made from scratch, there are several ingredients. Once you get the sauce out of the way, though, you’ll simply braise the chicken thighs and assemble your tacos.

What chiles to use in birria red sauce?

Anaheim chiles aren’t spicy at all. To me, I feel like they’re like green bell peppers. It’s possible that they could even be the same peppers in cans of mild diced green chiles.

I tried to add a little more heat by using the El Pato sauce. Although this sauce is spicy alone, it didn’t really turn out to give much heat when mixed in with the birria sauce.

If you want to add more heat, but still want to stick to the red color, try using a can of chipotle salsa instead.

You can also use Guajillo chiles or chiles de Arbol, which are even hotter. Check out my Scoville Heat Scale to learn more about each of the chiles and how spicy they can be.

What cheese to use in quesabirria tacos?

I guess I should explain the difference between birria tacos and quesabirria tacos first. It’s easy. Quesabirria means that the tacos are made with meat and cheese. Queso=cheese.

Although I’ve used Quesadilla cheese, you can use any melty cheese you can find. Oaxaca would be great, but it’s not available around here.

Try Monterey Jack or Pepper Jack for a spicy alternative. Mozzarella cheese could be used as well.

Is birria a goat meat?

Birria is braised or steamed meat, traditionally made from goat or lamb. More recently, it’s made with beef roast, but it can be made with any meat.

Birria is a a mixture of flavors, filled with sweet, savory, spicy seasonings. Each bite is a taste explosion.

Where is birria from?

Birria comes from the town of Cocula in the State of Jalisco, Mexico. You are probably already familiar with the capital of Jalisco… Guadalajara.

How long does it take to make birria?

There are quite a few steps to making birria. It’s especially time consuming if you need to cook the beef two or three hours until tender.

To shorten the time involved, I’m using chicken, but there are still a lot of steps.

Like my tamales recipes, I’ve learned to do things by splitting up the steps. My tip? Make the sauce first, even the night before.

If you make the sauce the night before, the fat will set on the top, making it easier to remove and use to fry the tortillas the next day.

I’ve used an Instant Pot to braise the chicken in the red chile sauce. The Instant Pot is a great way to steam meat and tamales, making it great for Mexican food.

I’ve included instructions on using a covered skillet as well. It’s easy to use either one here.

Have a look at this Ninja Professional Plus Kitchen System (aff link) at Amazon. It’s the one we use and includes the blender, a food processor bowl and two to-go cups.

What do you serve with birria?

If you decide to eat the birria as a stew, you can serve it with any typical sides. Check out my list of things to serve with tamales. You can use any of these.

If you decide to serve the meat assembled as chicken birria tacos as I’ve done, I don’t mind telling you that you don’t need any sides. I could easily eat them without anything else.

Okay, though, if you really want to add some sides, a little side salad and sliced avocado would be delicious. My Spanish rice recipe would be excellent as well.

I was able to find more history on birria and how birria became the hottest new taco trend.

Now, you’ll be able to jump on this trend right in your own home! 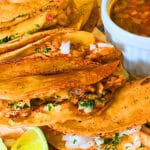 This is an involved recipe. If you want, you can make the sauce ahead of time and place it in the refrigerator. It’s actually easier that way anyway since the fat will rise to the top making it easy to remove and use for frying the tortillas. If you prefer to cook the chicken on the stovetop, use a large skillet with a cover. Sear the chicken in oil, add the required ingredients. Bring to a boil on medium high heat, reduce to simmer, cover and cook  for about 20-25 minutes, or until chicken temperature is 165℉. Follow the remaining instructions as written. After searing the chicken, you can also cook in the Crockpot or in the oven with a Dutch oven baking pan. *You can strain the sauce before pressure cooking or after pressure cooking, or both. Or neither. It’s a personal preference and I’ve strained out the solids whenever it felt right. And, I’ve also made it without straining out. Try different ways to see which is your favorite. To see the step-by-step process for making these birria tacos, see my web story at Easy Chicken Birria Tacos Story and Easy Birria Tacos Story.
Nutrition Facts
Chicken Birria Tacos Instant Pot and Stove +VIDEO
Amount Per Serving
Calories 362 Calories from Fat 216
% Daily Value*
Fat 24g37%
Saturated Fat 8g50%
Sodium 452mg20%
Carbohydrates 15g5%
Fiber 2g8%
Sugar 2g2%
Protein 22g44%
* Percent Daily Values are based on a 2000 calorie diet.
Course Main Course
Cuisine Mexican
Keyword Birria de Pollo, Birria Tacos, birria tacos dorados, instant pot birria tacos, instant pot chicken birria, Quesabirria Tacos
______________________