This Instant Pot Flan recipe is a decadent treat that can be made easily with only six ingredients. Serve alone or with whipped cream and a homemade spun sugar decoration.

What is Flan Made Of?

For this Instant Pot Flan, I’ve used a little less of each ingredient than normal because the pan is slightly smaller than a full size flan mold, called a “Flanera”.

You see how easy this is going to be already, I’ll bet.

Is Flan Spanish or Mexican?

Spanish or Mexican? Both, actually. Like much of the Mexican cuisine, it was influenced by Spain. It’s not just the Spanish language that was introduced to Mexico.

Different types of food were introduced too. Some things evolved over time. Flan, though, is very similar in both cultures.

Like many Mexican recipes, the ingredients are different between regions, states and villages. You may even find different recipes for flan by abuelitas on the same street!

I’ve tried to keep this recipe as traditional as I could, with the ingredients available. It makes a custard style dessert. If you like creme brulee, you can expect to like this as well.

To me, Flan tastes like a smooth, creamy sweet milk. It’s solid, but a little jiggly, like gelatin. There’s no gelatin in it, though. Unlike creme brulee, there’s a sugar syrup topping for a delicious, rich caramel like flavor.

The flan mold is called a “Flanera”. It’s perfect for this recipe. The latches on the side are like the latches on canning jars. It has a great handle on the top so that it’s easy to remove from the Instant Pot.

Have a look at this 8″ Flanera (aff link). This flan mold is perfect for making flan in the Instant Pot. I especially love that it has a handle on the top, making it easy to remove. You can use it for flan, pudding, lasagna and more.

If you don’t have a Flanera, you can use a straight-sided baking pan that’s compatible with your Instant Pot. You will need to cover it completely with foil.

Without the Flanera’s handle, you will need a long-handled trivet or a foil “sling” to help with taking out the finished Flan.

A flanera is a fully enclosed pan used to make the flan. The one we use also has a little handle on top, making it easy to get in and out of the Instant Pot.

Does flan need to be refrigerated?

Yes! Flan is made of milk and eggs so it must be refrigerated.

Like my Tamales Recipes, Flan is steamed to its creamy perfection. I find that the Instant Pot provides the perfect environment for steaming.

Besides, if you need to make a flan in the oven, you have to put it in a water bath and move that around, checking the water depth frequently. The Instant Pot makes it so much easier!

If you don’t have an Instant Pot, have a look at this 6-Quart Instant Pot (aff link) which we use. We’ve had it for several years and it still works great.

How to Make Spun Sugar Decorations

It turns out that making the Spun Sugar Decorations for the top of the Flan was extremely easy. I melted some sugar, the same way I did for the Flan itself.

Once everything was melted and cooled slightly, I was able to make lots of random shapes on a silicone mat. Within five minutes, I had them all created.

Check out this Spun Sugar Decorations video from Matt Adlard at Tastemaker.

Does Flan Need to Be Refrigerated?

Yes, absolutely. You must refrigerate any Flan. It’s made with all milk and eggs, which require refrigeration. Be sure to eat it within 2 or 3 days.

Try These Other Great Desserts

Who doesn’t love desserts?! Here are some of my favorites. 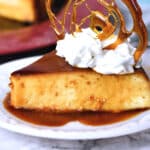 Prevent your screen from going dark
Tap to leave a star rating
5 from 27 votes
Cook Time: 1 hour 20 minutes
Chilling: 8 hours
Total Time: 9 hours 20 minutes
Servings: 8 servings
Calories: 354kcal
Author: Christian Guzman
Save or Print
This Instant Pot Flan recipe is a decadent treat that can be made easily with only six ingredients. Serve alone or with whipped cream and a homemade spun sugar decoration.

If a flanera is unavailable, a straight sided baking dish can be used instead. It will need to be covered completely with aluminum foil and you will need a long handled trivet in order to remove it after the Instant Pot has finished. If you do not have a long handled trivet, you could instead make a “sling” with foil for easier removal. For a creamier, more cheesecake-like flan, use 7 eggs instead of 5 and use 1 cup half and half instead of evaporated milk. This is my favorite version and is demonstrated in the video. It’s a simple swap of a couple of ingredients. Everything else remains the same. Serve with fruit and whipped cream, if you like. See post for information on making the Spun Sugar Decorations.
Nutrition Facts
Instant Pot Flan Recipe
Amount Per Serving
Calories 354 Calories from Fat 135
% Daily Value*
Fat 15g23%
Saturated Fat 8g50%
Sodium 193mg8%
Carbohydrates 45g15%
Sugar 44g49%
Protein 11g22%
* Percent Daily Values are based on a 2000 calorie diet.
Course Dessert
Cuisine Fusion, Mexican
Keyword creamy mexican flan, creme caramel, easy mexican flan, mexican custard, mexican flan
______________________