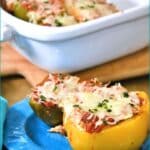 Since I used the peppers from the garden, I had a limited amount, and some of them were fairly small. It was really no problem because I had no issue with eating this delicious dirty rice stuffing all by itself.

This year, we had a lot of bell peppers ready for picking at the same time. I needed to come up with a recipe to use them.

I was able to squeeze eight bell peppers into the baking dish. It’s important that you try to squeeze those peppers in there.

During cooking, they will shrink a little. You don’t want them to fall over but, if they do, eat them anyway!

Try to use lean ground beef, if you have it. I use 85% lean with this recipe.

All the dirty rice stuffing ingredients go right into the bell peppers, including the fat. If you have too much fat, things are going to be greasy.

If you don’t have lean ground beef, go ahead and remove some of the fat before you add the vegetables. You don’t want everything swimming in grease.

I’ll admit that I’m fairly obsessed with Better Than Bouillon. It adds delicious flavor and color to the dish. We keep both beef and chicken flavors in the refrigerator.

If you don’t have it, you can use stock or broth instead of the water. No worries.

Do you have to boil bell peppers before stuffing them?

It really depends on the recipe. For this recipe, I’m using a fully cooked stuffing. You boil the peppers for 10 minutes before stuffing since you don’t need a full cook time in the oven.

How do you keep stuffed peppers from getting soggy?

The rice in the recipe is intended to soak up the liquid. Use lean ground beef to avoid all that grease that can make your peppers soggy.

Why are my stuffed peppers crunchy?

This is usually caused by not cooking the peppers long enough. Pre-cooking, like in this recipe, is the answer.

And one last tip, but it’s a biggie!

I chopped up a bell pepper to put in the dirty rice stuffing. While I was cooking the rice, I prepped the bell peppers by cutting off the tops.

I later used the tops for a salad but I realize now that I could have cut off the tops and used them in the dirty rice instead of the extra pepper. Live and learn, right?!

Why is it called Dirty Rice?

It’s fairly simple, really. The rice is cooked with ground beef and bits of vegetables. This makes the rice appear “dirty.”

You can also find Dirty Rice called other names like Cajun Rice or Cajun Fried Rice. Read more about the History of Dirty Rice at the McCormick website.

I’ve used two teaspoons of Tony Chachare’s Creole Seasoning. It’s delicious, but may not be entirely mild. If you prefer mild, decrease the amount of seasoning to one teaspoon.

If you want, you can skip the creole seasoning altogether. Use only salt and pepper, if you want completely mild.

Choose a pan that is a little deep. When the peppers start baking, they’re going to get softer. You don’t want them to spill out.

The peppers need to be packed in there a little. You don’t need to break the peppers putting them in there, but make sure they sit up next to each other well.

If you find that you’re now a fan of Dirty Rice, you’ll want to also try my Instant Pot Dirty Rice with Pork Sausage.

What to serve with the peppers?

Stuffed bell peppers, especially when stuffed with delicious dirty rice, are a meal by themselves. You don’t need to serve them with anything at all.

If you want to serve something, though, you may want to go for something light. A nice green salad will be great.

This would also be great with this Focaccia Bread recipe. Serve with some extra virgin olive oil for dipping.

For an easy side dish, my recipe for Sauteed Baby Bella Mushrooms would be perfect.

Try my Tomato Pepper Soup if you have even more bell peppers you need to use. 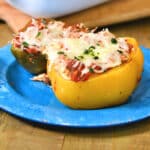 Tip on adding bell pepper to dirty rice: As I was prepping the bell peppers for the stuffing, I realized that the tops of the peppers could have been chopped and used for the dirty rice instead of using a separate pepper. There is enough dirty rice stuffing to stuff the bell peppers and quite a bit more, probably enough for 8-12 peppers depending on their size. There is enough to serve separately or place in a significant layer of rice under the bell peppers before putting in the oven, if you like to do that. Since I used the peppers from the garden, I had a limited amount, and some of them were fairly small. It was really no problem because I had no issue with eating this delicious dirty rice stuffing all by itself.
Nutrition Facts
Dirty Rice Stuffed Peppers (+video)
Amount Per Serving
Calories 238 Calories from Fat 72
% Daily Value*
Fat 8g12%
Saturated Fat 4g25%
Sodium 286mg12%
Carbohydrates 28g9%
Fiber 3g13%
Sugar 6g7%
Protein 12g24%
* Percent Daily Values are based on a 2000 calorie diet.
Course Main Course
Cuisine American, Fusion
Keyword cajun stuffed peppers, dirty rice stuffed bell peppers, lousiana stuffed bell peppers, new orleans style stuffed peppers
______________________