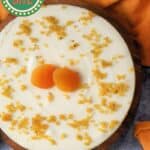 This No Bake Cheesecake starts with a traditional recipe but gives it a flavorful twist. The crust is made with dried apricots and walnuts. No graham crackers and it’s gluten free!

Mom has been making cream cheese pie for as long as I can remember. Cream cheese, sweetened condensed milk, lemon juice and vanilla in a premade graham cracker crust. You’re probably familiar with it, right?

I wanted the same taste except I wanted a different texture. I wanted all the goodness of the traditional pie but I wanted it to stand up like a cheesecake.

That’s when I discovered Knox Gelatine! It’s the same ingredient used to make jello, except it’s unflavored. Just one packet is all that I needed to get this cheesecake to stop looking like pie.

Since there is no egg in the ingredients, there’s nothing to really hold it together like you would with say, Mexican Flan.

That one little packet of gelatin takes you from pudding to cake in a flash!

Why is my no bake cheesecake too soft?

Sometimes it’s the cream cheese itself. It could have too much liquid in it. Or, if you’re using lemon juice to basically curdle the cheese, you may have used the wrong amount or it wasn’t fresh enough. My recipe uses gelatin so it’s more fool-proof.

How do you thicken a no bake cheesecake?

My fool proof way to thicken it is my recipe here, using gelatin. If you’re following a different recipe, you could place the cheesecake in the freezer to thicken but don’t leave it in there too long since it could change the texture.

What’s the difference between cheesecake and no bake cheesecake?

It’s not as obvious as bake and no bake. A baked cheesecake has eggs and is cooked in a water bath. The no bake version doesn’t have eggs and is placed in the refrigerator right away, without cooking time.

No Graham Crackers in the Crust

Most cheesecakes have a graham cracker crust. I’ve made one with a vanilla wafer crust too. But, I wanted apricot. So, I came up with this fun new crust.

Nothing but dried apricots, walnuts and a little bit of sugar to help separate the bits. Put them in the food processor and off you go.

It’s a gluten free dream. No bake and it’s even vegan. I can see many applications for it in the future.

The rest of the cheesecake is obviously not vegan, of course. But, the crust could be a life changer!

How to Use Leftover Apricot Mix

I’m working on some recipes to use any leftover of this mix. You can still use it as a topping for oatmeal or cereal. It’s tasty on top of ice cream.

This buttery Apricot Shortbread Cookie recipe is great to use leftover apricot walnut mix. You simply replace the mix provided in that recipe already.

If you have ½ cup leftover, you can make these delicious Apricot Soft Granola Bars.

Is the Crust Gluten Free?

This crust is naturally gluten free. You don’t have to use special gluten free ingredients. Just fruit and nuts. It’s as simple as that.

How Long Does No Bake Cheesecake Last?

Store any leftovers in an airtight container in the refrigerator. Eat as soon as you can since it will only last up to 5 days.

You can take a look at all my Dessert Recipes or here are some of my favorites: 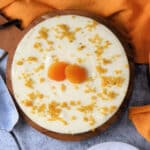 No Bake Cheesecake with Apricot Crust

Prevent your screen from going dark
Tap to leave a star rating
5 from 29 votes
Prep Time: 20 minutes
Chilling: 8 hours
Total Time: 8 hours 20 minutes
Servings: 12 slices
Calories: 446kcal
Author: Christian Guzman
Save or Print
This No Bake Cheesecake starts with a traditional recipe but gives it a flavorful twist. The crust is made with dried apricots and walnuts. No graham crackers and gluten free!

There is enough apricot walnut mixture and filling to make up to an 8.5″ cheesecake pan. The difference in size will only affect the height of the cheesecake, since it’s a no-bake cheesecake. The nutrition information takes into account the entire list of ingredients. You probably won’t use all the apricot crust ingredients, but there’s no way to calculate that beforehand. Extra apricot mixture can be used to top yogurt, cereal or oatmeal.
Nutrition Facts
No Bake Cheesecake with Apricot Crust
Amount Per Serving
Calories 446 Calories from Fat 243
% Daily Value*
Fat 27g42%
Saturated Fat 14g88%
Sodium 191mg8%
Carbohydrates 45g15%
Fiber 2g8%
Sugar 42g47%
Protein 9g18%
* Percent Daily Values are based on a 2000 calorie diet.
Course Dessert
Cuisine American
Keyword Apricot Cheesecake, No Bake Apricot Cheesecake
______________________