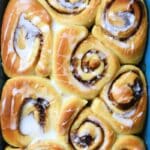 This Hawaiian Bread Cinnamon Roll is the special treat of your dreams. It’s homemade goodness made with the ease of a bread machine.

Cinnamon rolls are soft, fluffy and delicious but imagine them made with a Hawaiian bread dough! It gives a wonderfully sweet flavor, unlike any other.

I’ve never made a bread dough with this many ingredients. This dough is flavored with:

There’s even an egg for good measure. When you want to make cinnamon rolls, it’s best to go all out.

The only thing I didn’t do with this recipe is proof the yeast. I probably should have, just to be safe. But, I didn’t.

If you want to proof the yeast, you could heat the pineapple juice in the microwave until just warm. I knew I was taking a chance and breaking my own yeast rule.

I’m glad to say that it worked out perfectly without issue but I also knew that this yeast was fairly new.

This utensil is something new we found. It’s called a “spurtle”. It’s perfect for spreading.

What cinnamon to use for cinnamon rolls?

The common “cinnamon” purchased in the United States is actually something called cassia. It’s not real cinnamon, though.

I’m not sure that I’ve ever had cassia because mom has bought true cinnamon my entire life. Scientifically, there is only one true cinnamon and it’s called Ceylon Cinnamon.

If you’ve never tried Ceylon Cinnamon, you may be surprised. Mom says that the taste is completely different. I encourage you to give it a try.

What kind of cinnamon does cinnabon use?

Cinnabon uses a trademarked version of Korintje cinnamon which comes from Indonesia. It’s called Makara. Read up on some fun facts about Cinnabon.

How do you slice cinnamon rolls?

When you slice the cinnamon rolls, I suggest using a stiff cotton twine. I was honestly looking around to see if I could find some food grade wire, which would be even easier.

It will be easier to make uniform cuts when there are smaller pieces.

Do you have to use a bread machine?

Like all of my homemade breads, I use a Cuisinart bread machine. It’s quick and easy. It’s almost impossible to mess up.

If you don’t have a bread machine, have a look at this Cuisinart Bread Machine that we use. We’ve had it since 2013 and it still works great.

For more information, check out our Cuisinart Bread Maker Recipes.

I’ve included instructions for using a standing mixer, if you prefer to make the dough manually.

Prevent your screen from going dark
Tap to leave a star rating
5 from 36 votes
Prep Time: 20 minutes
Cook Time: 20 minutes
Rising Time: 3 hours
Total Time: 3 hours 40 minutes
Servings: 16 rolls
Calories: 140kcal
Author: Christian Guzman
Save or Print
This Hawaiian Bread Cinnamon Roll is the special treat of your dreams. It's homemade goodness made with the ease of a bread machine.