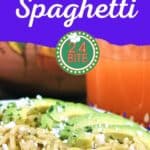 Here’s your chance to use some flavorful roasted poblano chile peppers and tomatillos in a creamy pasta recipe.

With only one jalapeño pepper, you won’t have a lot of spicy heat. The creamy verde sauce simply has that bright chile flavor without the heat.

You can always increase the heat, if you prefer. Have a look at my Scoville Heat Scale to rate your chile peppers.

Contrary to a lot of information I’ve read, I don’t necessarily think that you absolutely must char and peel poblano peppers. For this recipe, it was a personal choice.

Char the peppers to get a more subtle roasted flavor which is delicious. It adds more flavor depth to your recipe.

My preference is to broil poblano peppers in the oven, but I’ve also charred them on the grill.

I’ve roasted poblanos in the oven many times. It seems to work the best for me if I use a really high heat (broil) to cook them quickly.

You have a better chance at getting more of the pepper intact when you cook them quickly, at high heat.

Next, for the remaining vegetables, saute in a little bit of olive oil.

Once your vegetables are soft enough, add them to the blender with the roasted poblano peppers.

Afterward, now that you have everything blended, you can pour it back in your skillet. Bring it to a boil before cooking the Fideo Cut spaghetti right in the liquid of the sauce.

You don’t need to cook your pasta separately. It will all cook together. Pretty easy, right?

Don’t worry if you’re unable to find Fideo Cut spaghetti. There’s nothing super unusual about it.

Fideo Cut spaghetti is simply spaghetti that’s been broken into one-inch pieces. You can use any spaghetti you like and break it apart yourself.

Or, leave it long. It will work just as well.

Fideo spaghetti is quite popular in Mexican cuisine. It’s the kind of thing that many people consider to be a comfort food.

Fideo soup (sopa de fideo) is usually a tomato based soup. I’ve decided to change things up with this verde green version.

I have a ground beef recipe of my own Easy Fideo Soup here.

Fideo spaghetti is small pieces and perfect for kids. You don’t have to cut it up to serve.

I’ve pretty much had it this way my entire life because of that. 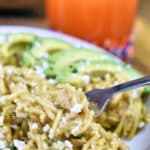