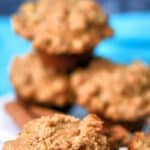 These Cinnamon Pecan Mini Muffins are just the perfect treat for breakfast or brunch. Each one is like a little bite of mini coffee cake.

I really like cinnamon, don’t you? Real cinnamon. Are you familiar with the differences in cinnamon?

Like all my recipes that include cinnamon, I use Ceylon Cinnamon. It’s made in Sri Lanka and I’ve never seen it at the grocery store. We only get it online at Amazon.

Cassia is Chinese Cinnamon. It’s the common cinnamon you find in the stores in the United States. I believe it was introduced to the United States because it’s less expensive and easier to produce.

If you’ve never tried Ceylon Cinnamon, I encourage you to give it a try. It has a true cinnamon taste and is much better for you than cassia. You can read about the Differences Between Cassia and Ceylon Cinnamon at Paleo Foundation.

If you are going to use Cassia in this recipe, you may want to use one teaspoon instead of one tablespoon. Ceylon Cinnamon is smoother and has delicious flavor.

Why Add Sour Cream to Muffins?

Sour cream is a terrific way to add moisture to your muffin batter without adding a lot of liquid. It’s the secret ingredient for baked goods. Have a look at my Easy Bisquick Blueberry Biscuits too!

Don’t omit the sour cream. You won’t actually taste it. You just need to let it do its job.

You can serve these delicious cinnamon pecan mini muffins for breakfast or brunch. I like to grab a few as a snack. They’re incredible warm out of the oven with some melty butter.

You can make them more of a dessert by adding a powdered sugar drizzle. Just mix a little bit of milk or water with powdered sugar until you get the consistency you want. 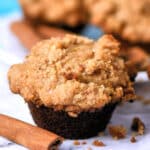 Prevent your screen from going dark
Tap to leave a star rating
5 from 28 votes
Prep Time: 15 minutes
Cook Time: 25 minutes
Total Time: 40 minutes
Servings: 36 mini muffins
Calories: 131kcal
Author: Christian Guzman
Save or Print
These Cinnamon Pecan Mini Muffins are just the perfect treat for breakfast or brunch. Each one is like a little bite of mini coffee cake.

« Pork Egg Roll in a Bowl
Our Best Pizza Recipes »